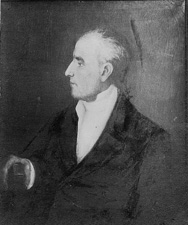 Buckner Thruston served as a judge for the Circuit Court of the Sixth Circuit from 1809 to 1845. Born in Gloucester County, Virginia in 1764, he graduated from the College of William and Mary in 1783. Five years later, Thruston began a law practice in Lexington, Kentucky, that lasted until he became a federal circuit judge in 1809. During these years, he also served as a member of the Virginia House of Delegates (1788-1789), as a commissioner to resolve a boundary dispute between Virginia and Kentucky (1791), as a judge on the Kentucky State District Court (1791), as a clerk for the Kentucky State Senate (1792-1794), as a judge on the Kentucky Circuit Court (1802-1803), and as a United States senator from Kentucky (1805-1809). In 1809, President James Madison nominated Thruston to the Circuit Court for the District of Columbia. He was confirmed by the US Senate on December 13, 1809 and received his commission the next day. Thruston held the seat until he passed away on August 30, 1845.

Image is in the public domain, see Wikimedia Commons: https://commons.wikimedia.org/wiki/File:ThrustonBuckner.jpg