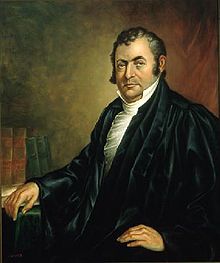 Robert Trimble served as federal district court judge of Kentucky before becoming a justice on the Supreme Court of the United States. Trimble was born on November 17, 1776 in Augusta County, Virginia. Trimble grew up in Kentucky where he attended Transylvania University. Trimble was admitted to the bar in 1803. Four years later, Trimble was appointed to the Kentucky Court of Appeals, becoming Chief justice in 1810. He later resigned from the state courts to serve as United States District Attorney from 1813 to 1817. President James Madison appointed Trimble to the District Court of Kentucky on January 28, 1817. Eight years later, President John Quincy Adams nominated him to the Supreme Court of the United States, upon the death of Justice Thomas Todd. The Senate confirmed the appointment on May 9, 1826 and he received commission on May 9, 1826. Trimble served on the Supreme Court for two years and died on August 25, 1828.