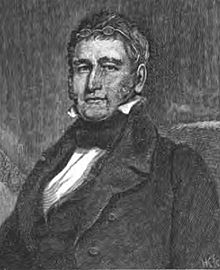 John Rowan represented Kentucky in both houses of the United States Congress. Rowan was born on July 12, 1773 in York, Pennsylvania. He read law in 1793 in Lexington, Kentucky and was admitted to the bar in 1795. After his admittance, Rowan practiced law in Louisville. In 1799, Rowan was a member of Kentucky's second state constitutional convention. Five years later, Governor Christopher Greenup appointed him as Secretary of State, and he served in the role until he was elected to the US House of Representatives in 1806. Rowan represented Kentucky's Third District during the Tenth Congress. After the one term, he returned to Kentucky and served in two state-level public offices, as a legislative member of the Kentucky House of Representatives (1813-1817, 1822, 1824) and as judge on the court of appeals (1819-1821). In 1825, Rowan was elected to the US Senate and, toward the end of his term, served as chair of the Committee on the Judiciary (1829-1830). He lost re-election in 1831 to Henry Clay. After returning to Kentucky, Rowan maintained an active public life, accepting presidential appointment 1840 as a commissioner to fulfill the 1839 treaty with the Republic of Mexico. Rowan passed away on July 13, 1843.